Lost Illumination is the first book in a series of three.
It is the story of an ancient group of warriors called The Great Aldrics. The Aldrics are a medieval people whose purpose is to protect the world from demon-like monsters called Skathes.
During the dark ages, the Skathes became so powerful that the Aldrics resorted to using magic to fight them. They planned to trap the Skathes in another dimension where they could no longer do direct harm to the world.
In an unfortunate twist of fate, something went wrong and the Aldrics accidentally trapped themselves in this other dimension, right along with the Skathes.
In this new realm, the Aldrics no longer had the power to fight the Skathes. They were forced to barricade themselves inside of a tiny kingdom for thousands of years.
It is now present day, and the Skathes have mysteriously found a way back into the real world. The Aldrics' only hope of saving humanity is to bring a person from the real world into the new realm. They know that only a person who is not under the spell of imprisonment can help them break free.
Whether by fate or chance, thirteen-year-old Christian Bennett is chosen for this task. Having already faced a life of trouble, this young boy's reality is turned upside down when he is taken from his home and thrust into a world of chaos and terror.
Will Christian have the courage to abandon his fears and save the world from a hellish fate?

More about book one...

​
This is a short blurb:
"Christian is dragged into a strange world where his worst fears come to life. He soon comes to discover that he has been chosen to determine the fate of an ancient people who have the power to save the world from a hellish fate. Christian must face dangers and solve mysteries in order to break a powerful curse. If he does not succeed, hundreds of lives will be lost...and billions cursed forever.

This is the full synopsis found on the back of the cover:
"When an eerie voice interrupts Christian’s ordinary life, the familiar scene of the Fall Valley boarding school crumbles into uncertainty. Soon this boy’s worries are shifted from the troubles of his past to the terrifying disturbances that haunt him at every turn. In a matter of days, the menacing voices and shadowy shapes become the least of his troubles.
Christian decides that he must face his foes or live forever in fear. In doing so, a mysterious force drags him into a strange and unfamiliar land where the unnatural terrors are somehow perfectly catered to torment him.
It isn’t long before Christian is discovered by the inhabitants of this new realm. A peculiar, but seemingly trustworthy fellow leads him to safety and introduces him to an ancient kingdom that has been lost for ages.
Christian may think himself a victim of circumstance, but he soon discovers that he has been chosen to determine the fate of an ancient people. The task may seem impossible, but if Christian does not succeed, hundreds of lives may be lost…and billions cursed forever.
The terrors are relentless, the secrets are endless, and the expectations that are thrown upon this thirteen year old boy are almost overwhelming. The past may have stolen his hope for the future, but Christian must decide if he has the courage to abandon his doubts and seize the path to a truly unfathomable destiny."
​

Inside look at the making of Lost Illumination 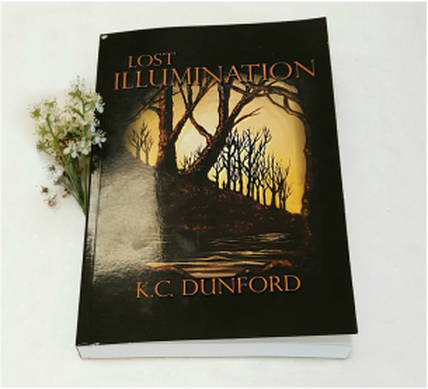 ​​I began working up ideas for this book at a very young age. I always knew that I wanted the story to be a trilogy, and I always knew I wanted it to be a fantasy, but the minor details spun themselves together little by little over the years.
I first thought of the idea for the book at around the age of nine. I was walking to the bus stop when I noticed the reflection inside of a large mud puddle. The sky, trees, and surroundings were so crisp and beautiful that I was instantly captivated. I immediately imagined that this mud puddle was really a gateway into a separate world. After that idea was born, the whole story began to weave together. I drew pictures and wrote poetry inspired by my idea, and eventually, I had a whole plot in mind.
When I was eighteen years old, my parents bought me a laptop for Christmas. That very day, I went up to my room and began the first chapter of Lost Illumination. That version of my book was of course, later changed and deleted, twisted and improved, until finally, it grew into something that I was very proud of.
When I was nineteen years old, I left the United States to serve a full time LDS mission in the country of Portugal. I set my writing to the side for a year and half, but all the while, I kept my eyes open for ideas and inspiration. I even carried around a pocket-sized notebook where I could jot down my creative findings.
After returning from Portugal and giving "Lost Illumination" another read, it was clear that it needed some big improvements. I took college courses, attended online writing seminars, and read as many books on writing as I could get my hands on. Then I began the deep editing and sharpening stage of my book. After becoming a bit more educated in the writing world, it was clear that there was a lot of work to be done. However, after several months of deep cleaning, copy editing, and peer criticism, "Lost Illumination" was finally ready to be published.
I'll admit that I was quite nervous about putting my book out there. I had put so much time, effort, and passion into creating the story and I hoped that others would love it as much as I did. Thankfully, Lost Illumination has received wonderful feedback and excellent reviews. My confidence as a writer has grown tremendously, and my fire to continue down this path has increased tenfold. Publishing "Lost Illumination" is definitely a dream come true. I am so thrilled to release the second and third books in the trilogy and to continue my writing career throughout my life.